West Seattle has been working to resolve its transportation challenges for 125 years. We initiated Puget Sound’s first ferry service in 1888 and we built America’s first municipally funded commuter rail system in 1906. Today, that extensive rail line is gone, replaced by inadequate bus service and single lane choke points that hamper the mobility of our 100,000 citizens.

Seattle has not supported or expanded our historically great transportation ideas. Thanks to the lags and half measures the city has offered over the years, there’s widespread perception here that West Seattle and its transportation issues are not, and never have been priorities for the City of Seattle. 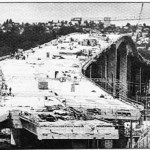 It took the City five years to re-build the South Park Bridge after significant lobbying efforts of citizens, six years to rebuild Seattle’s Spokane St. bridge after a freighter rammed the old one in 1978, and decades to re-start the seasonal cross bay West Seattle Water Taxi to downtown. After significant citizens efforts and pressure, the City is finally addressing safety and speeding issues on SW Roxbury Street and 35th Ave SW.

As our Peninsula population increases, traffic increases and further chokes ingress-egress. Our two bridges are gridlocked for hours every day now — with 93,000 vehicles crossing West Seattle’s high bridge, and 13,000 crossing the low bridge. Together, these bridges are Seattle’s busiest, non-freeway traffic corridor, carrying more human and freight volume than any other city bridge. By the time Move Seattle expires, West Seattle’s population in our Alaska Junction and Triangle areas alone will grow to equal or surpass that of Ballard.

Move Seattle fails to address West Seattle’s key issue — getting into and out of the peninsula, safely and efficiently. While the WSTC appreciates and supports the proposals West Seattle pedestrian and bicycle infrastructure improvements, we ask the Mayor and City Council to support and clearly define Council Member Tom Rasmussen’s amendment to Move Seattle. We would like the levy to:

Meanwhile, the clock is ticking down for West Seattle as our population and development density increase, and the Port gears up with planned expansions on Terminal 5, where freight and industrial growth will further choke traffic flows to SR 99, I-5, I-90, Marginal and Alaskan Ways. It’s a perfect storm of adverse effects on our situation.

West Seattle and South Park need a solution today. We cannot wait for some future, theoretical ST3 or ST4 package. We expect our leaders and elected officials to do whatever it takes to move the people of District 1 now.