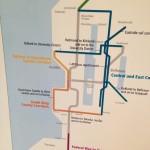 Areas under review by Sound Transit for Light Rail.

There seems to be a strong hunger in West Seattle for Light Rail expansion to, and through, West Seattle.

On November 21, members of the West Seattle Transportation Coalition attended an information hearing held by Sound Transit about the revision process for their long-range plan. Prior to this, virtually all the feedback we have heard either through the WSTC or through our various West Seattle community groups was overwhelmingly in support of and in favor of expanding Light Rail to West Seattle.

At least one community group which has endorsed the WSTC (Westwood/Roxhill/Arbor Heights Community Council) had conducted a Facebook survey of their membership to see if they favored Light Rail. The public results as of November 26 are 24-0-1 in favor of Light Rail to West Seattle (using a Yes-No-Maybe format). That is for one sample a 96% approval rate. While at the event, Sound Transit spokespeople told the WSTC that of all the West Seattle resident responses they have received in their survey that ended on November 25, the approval rate was at 94% as of November 21.

In response to this, the WSTC has drafted and sent the following letter of support to the Sound Transit comment feedback process on November 25, based on this apparently unambiguous overall support for Light Rail in our community:

The West Seattle Transportation Coalition is a peninsula-wide organization working to address transportation and mobility issues for Seattle’s largest constituency. Representing more than 100,000 people living and working in the 10 square mile area between the Duwamish River and Puget Sound, we are community leaders, advocates, business owners, residents and workers focused on addressing the transportation and commuting challenges of West Seattle. We need a permanent mass transit solution such as light rail to serve our growing needs.

2. Natural barriers: West Seattle has only limited routes connecting it to downtown and beyond for the vast majority of its residents. Mass transit is the only option that can move us across these choke points to keep our transportation systems functioning.

3. Loss of infrastructure: The scheduled removal of the SR-99 Viaduct without sufficient replacement capacity on other routes to and from our peninsula.

4. The reduction of mass transit services: The current insufficient level of transportation service by King County Metro will be compounded by the proposed cuts in our already under-served area.

As a significant portion of Seattle’s population yet with a relative lack of mobility for an area so close to downtown, the residents of West Seattle must choose single-occupancy vehicles in greater numbers. These trips add to the region’s congestion and the resulting adverse economic and environmental impacts. The West Seattle Transportation Coalition calls upon Sound Transit to expedite the study of viable rail and related mass transit system integration to produce permanent solutions to these identified challenges affecting our peninsula. Dedicated high capacity transit is the only permanent, long-term transportation solution that meets the current and projected needs of West Seattle.

The coalition looks forward to partnering with you directly on the matters stated above. We respectfully invite you to RSVP and present at our January 14th public meeting. We expect to have representatives from state, county, and city government and as well as all relevant transportation agencies such as Sound Transit together to start working together to create long-range, sustainable solutions that propel our neighborhoods, city, county and state into thriving communities.

A PDF version of the file is available here for download: WSTC Letter to Sound Transit re Long-Range Planning.

To see photos the WSTC took of all the Sound Transit materials at the November 21 event at our Facebook gallery: Click here.

To join the West Seattle Transportation Coalition and to make Light Rail, and help to resolve other long overdue and neglected transportation issues for community:

What can you do to help?