Sometimes we see comments and questions along the lines of, “How is that bus profitable? No one is on it. The last time I rode it, it only had two people on the bus coming into West Seattle.” Someone asked this about the #50 today. Here is the KC Metro route page for the #50:

We’ll run you through a typical bus line here, and why it’s not a problem to see it empty–sometimes. This will make sense by the end. 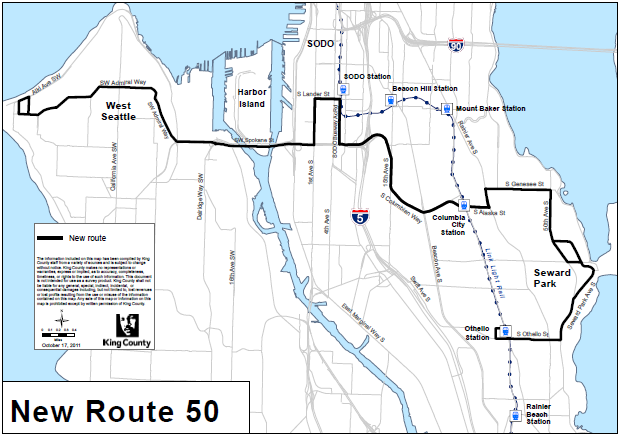 It goes from Othello Station on in southeast Seattle to Seward Park, to Columbia City, to the VA hospital on Beacon Hill, to the SODO Busway & S Lander (by Amazon), to the West Seattle Bridge, to the Alaska Junction here in West Seattle, to 61st Ave SW & Alki Ave SW (the beach in Alki), and then back again. It hits, basically, several business districts, a hospital, two major recreation destinations in the city (that cater more to locals versus “outside” tourists–how many out of towners will you see at Alki or Seward versus Pike Place Market? We’re not exactly a beach destination for tourists).

That bus runs 36 times per day, from 5:14am to 11:04pm, and each “run” takes about an hour. It takes on average around 8 to 11 minutes to go from location to location. The #50 averages about 2200 “riders” per day from Monday to Friday. Assuming each of the 36 individual runs had an even share of the riders that means each run would be carrying 61 passengers in total. That means at each stop, somewhere between 4 to 9 people are boarding the #50.

They usually use a bus with a capacity of 30 people to operate the #50. Not every single person is going to ride all the way from Othello to Alki or from Alki to Othello each time, of course. Some get on; some get off. But, we’re averaging per run double the physical capacity of the bus, so far.

There’s another consideration, as well: the route 50 directly connects West Seattle and other neighborhoods to the Light Rail to SeaTac Airport.

Realistically, the 5am bus and the 11pm bus aren’t going to have as many people on it. The buses between 7am-830am and 430pm-6pm are going to have the bulk of the riders, because that’s the case for many bus lines. On many of the runs, you’ll have the #50 at capacity or very crowded, but again, not for every stop. This is just how a bus line works. The route overall does fine for it’s usage, and the off hours buses serve the public good by letting people ride. While there may only be 5 people getting onto the 5:14am bus at Alki, that’s fine. By the time the bus has gotten to the VA hospital, that run in costs to Metro is likely already paid for, even if there are less people on it.

If the route wasn’t cost effective, and wasn’t in an area that requires additional services (per King County laws) Metro would contract the service and shift that budget somewhere else. Why do we know that? Remember that the #21 used to drive deeply into Arbor Heights, where now it only gets the 21 express commuter service. The justification that was given by Metro was that not enough riders rode the #21 deep enough into Arbor Heights past the commuting hours to justify all day service. Metro has no money to waste running empty buses to nowhere. If a route survived the 2012 cuts, it’s got people riding on it and that route is needed.